skip to main | skip to sidebar

The Deepest Torahs From Izhbitza and Radzin Chassidus - Parshas Vayigash 5770

4 Vayigash
Posted by The Rebbe Reb Mailech at 4:05 AM No comments:

Posted by The Rebbe Reb Mailech at 7:26 PM No comments:

radzin-vayishlach
Posted by The Rebbe Reb Mailech at 5:46 AM No comments:

Posted by The Rebbe Reb Mailech at 9:57 PM No comments:

Posted by The Rebbe Reb Mailech at 6:40 PM No comments:

Posted by The Rebbe Reb Mailech at 10:16 PM No comments:

Posted by The Rebbe Reb Mailech at 9:01 PM No comments:

Posted by The Rebbe Reb Mailech at 7:21 PM No comments:

Posted by The Rebbe Reb Mailech at 3:04 AM No comments:

New Photos From London and Jerusalem!!!

Posted by The Rebbe Reb Mailech at 5:46 PM No comments: 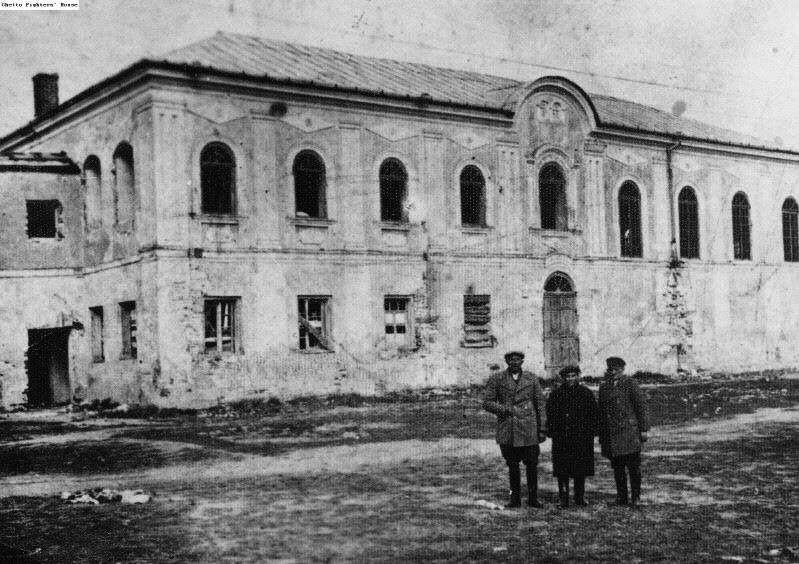 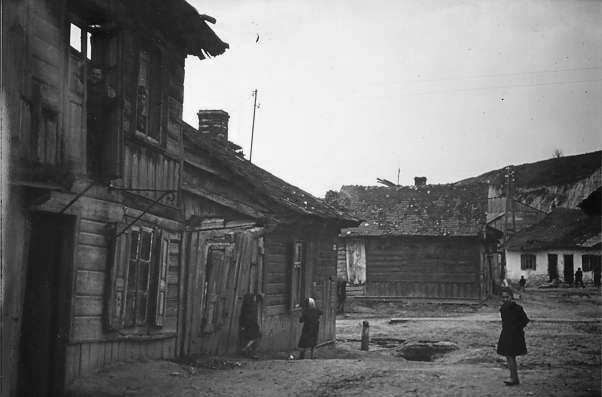 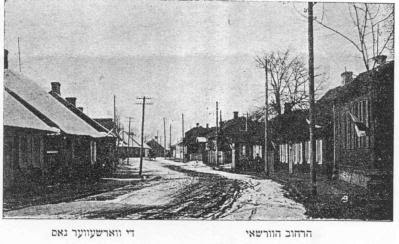 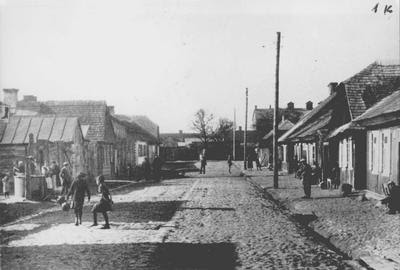 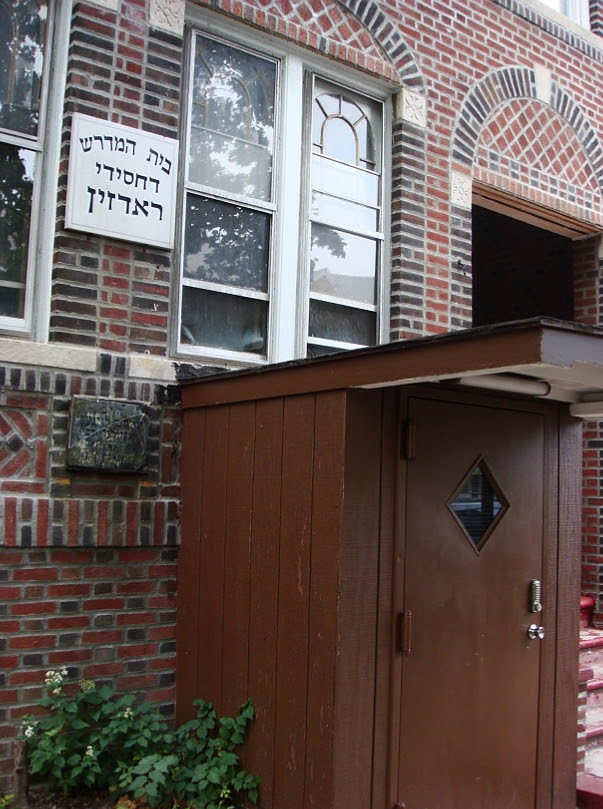 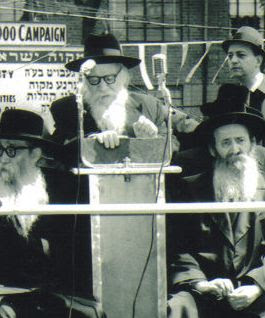 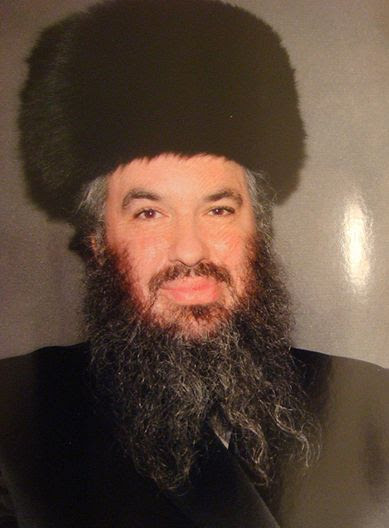 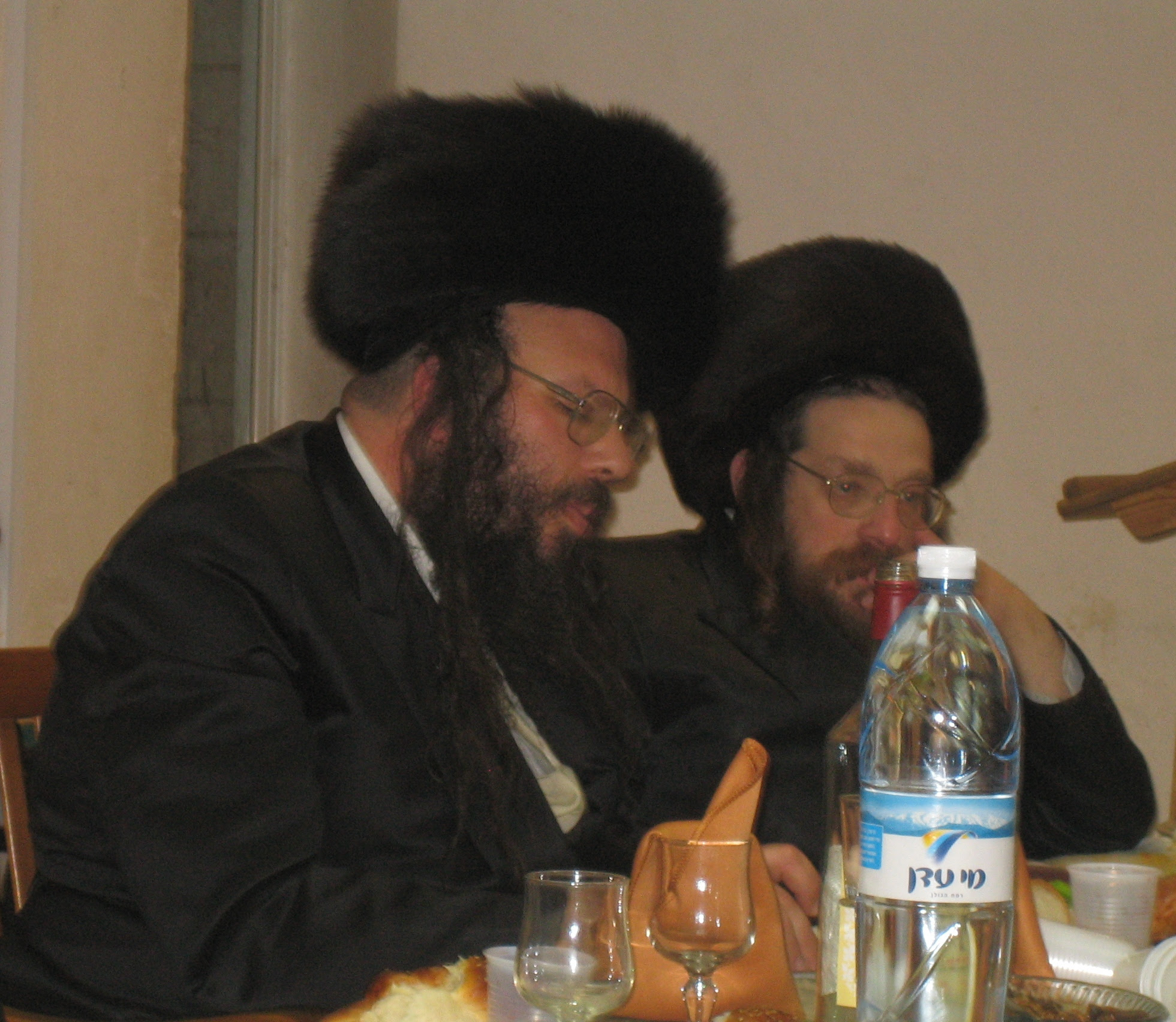 Poster announcing visit of Admor Moshe Leiner of Radzin, SHLIT"A, to London, 5767
Posted by The Rebbe Reb Mailech at 5:12 PM No comments:

3a. Grand Rabbi Moshe Chaim Sokochevski of Biskivitz-Reivitz, son-in-law of Bais Yaacov, Rebbe in Biskivitz after his uncle the Naos Deshe, later relocating to Reivitz, Poland.

3a. Grand Rabbi Gershon Chanoch Henech Leiner of Radzin, son of Bais Yaacov, author of Orchos Chayim, Sod Yesharim, Tiferes Hachinochi,and Dalsos Shar Ha'ir, among many other seforim. The Rebbe is referred to by Radziner Chasidim as the Orchos Chaim, based on his phenomenal work on the Tzava'ah - the will - of the Tana Rabbi Eliezer HaGadol. This work was written by the Rebbe basically without any open books to his advantage, in only 12 days, during his trial on a libel fabricated against him by his adversaries. When the Rebbe published this work, he commented to his chasidim that he's happy that he got to print his Tzava'ah. In the larger world the Rebbe is better known as the Ba'al HaTecheles. The Rebbe was brilliant in both the revealed and the hidden Torah. He was also extremely knowledgeable in several scientific fields, like chemistry, engineering and medicine. He spoke several languages fluently, and used them frequently while prescribing medicines in Latin to the countless people who turned to him for help. At the age of sixteen, the Rebbe had already formulated a spectacular idea: he would compose a "gemarah" of a sort on the mishnayos of Seder Taharos, as there is no Talmud Bavli on that tractate. In order to accomplish this, he gathered all the relevant material from the whole Bavli shas, Yerushalmi shas, and all other Braysos etc., and presented them in chronological order in a sefer he called Sidrei Taharos on Maseches Keilim. He later did the same with all the other tractates of Seder Taharos. The task took him ten years to complete. He worked tirelessly for the restoration of the techeles of the tzitzis. He made use of his vast knowledge to research the topic, and traveled to Italy four times to conduct his study. While there he visited what was then the largest aquarium in the world, in the coastal city of Naples, and upon studying the different sea creatures, he came to the conclusion that the original Techeles was extracted from the secretion of a squid called the cuttlefish (in Hebrew known as the Dionon). Rumors have it that on one of the Rebbe's visits to Rome; he succeeded in persuading the Vatican to allow him a quick glimpse of the Holy Vessels of the Beis HaMikdosh, to match his findings with the techeles on the priestly garments. He published several books on the topic, such as Sefunei Temunei Chol, Pesil Techeles, and Ein HaTecheles , and succeeded in influencing many Gedolim with his work. At the same time, there were Gedolim who opposed to the Rebbe's discovery and did not agree with his findings. There was, however, a small number of Gedolei Yisrael who would practice the rediscovered custom of techeles, like the Maharsham of Berzan who possessed a tallis with techeles fringes. All his chassidim and followers wear them, as do Breslov chassidim to this day. The Rebbe was also known for his standpoint on machine matzos, and after extensive research he found several serious problems in the process of making them. He then distributed an announcement by which he required the Rabbonim to address those problems and to note it on the hechsher that they provide. He was the first rebbe known as "The Radziner Rebbe". Died 4 Teves 5651.

4a. Grand Rabbi Mordechai Yosef Elazar Leiner of Radzin, son of Orchos Chaim, author of Tiferes Yosef. One of the more famous and very influential leaders of Polish Jewry. The Rebbe was one of the founding members of Agudas Yisroel, and served as its vice president until his passing. Died 26 Shvat 5689.

5a. Grand Rabbi Shmuel Shlomo Leiner of Radzin, son of Tiferes Yosef. Established the Radziner Yeshiva Sod Yesharim in Radzin, Poland. The Rebbe was known for encouraging resistance to the orders of the Nazis and the Judenrat and for urging people to break out of the ghettos, flee to the forests and take up arms. The story goes that in his last moments, the Rebbe was wrapped in his father's tallis as a Nazi soldier took him into the Wladawa cemetery at gunpoint. At one point, the Nazi pushed him. The Rebbe turned around and slapped hin across the face, and kicked him. This obviously stunned and angered the Nazi greatly. The Rebbe was immediately shot to death on that day, 29 Iyar 5702.

3c. Rabbi Mordechai Yosef Leiner of Lublin, son of Bais Yaacov, published the second volume of Mei HaShiloach. One of the important community figures in Lublin. Rabbi Mottia Leiner (as he was referred to lovingly by Radziner Chasidim) was one of the staunch supporters of his great-nephew Grand Rabbi Shmuel Shlomo Leiner of Radzin, and was very instrumental in finally convincing him to become the Radziner Rebbe in his father's place.

3d. Grand Rabbi Avraham Yehoshua Heshel Leiner of Radzin-Chelm, son of Bais Yaacov, author of Likutei Divrei Torah. son of Bais Yaakov, author of Likutei Divrei Torah. While his older brother, Grand Rabbi Gershon Chanoch Henech Leiner of Radzin was Rebbe, he was by his side and his top talmid. He was highly respected for his honesty and righteousness. After his brother's death, he moved to Chelm and continued the Radziner line there. Died 27 Shvat 5680.

4d-2. Rabbi Ovadya Leiner of Radzin-Chelm, son of Likutei Divrei Torah. Lived in Warsaw. Considered by Radziner Chasidim to be an exceptionally special and holy person, and his cousin Grand Rabbi Shmuel Shlomo Leiner of Radzin would send many people to him to receive his brachah.

4d-5. Grand Rabbi Yerucham Leiner of Radzin, son of Likutei Divrei Torah, author of Tiferes Yerucham. Moved from London to America. Considered to be the continuation of the Radziner line in America. He was an expert in all areas of Torah and scholarship. There existed very few admorim/tzaddikim since the beginning of Chassidus who were also lamdanim in both the Polish and Lithuanian styles of learning, bibliographers, Jewish historians, very learned in Kabbalah works, philologists, and masters of both the Babylonian and Jerusalem Talmuds. He was such an admor/tzaddik. He studied and visited with R. Yitzchak Hutner and they were good friends in later life. They always treated one another with special respect. The shteibel he built in Boro Park was under the auspices of his oldest son, Grand Rabbi Yaakov Leiner of Radzin-Boro Park. Died 20 Av 5724.

5d. Grand Rabbi Mordechai Yosef Leiner of Radzin, son of Tiferes Yerucham. Republished many of the seforim of the Izhbitza-Radzin dynasty. Died 3 Shvat 5751.

6d-1.Grand Rabbi Yaakov Leiner of Radzin, son of Grand Rabbi Mordechai Yosef Leiner of Radzin, was Rebbe in Boro Park, where he maintained a shteibel and kollel. Although Reb Yaakov was totally familiar with the Chassidic thought of his illustrious ancestors, he was first and foremost a lamdan, in the style and spirit of the Rebbe Gershon Henoch, who also wrote the classic Sidrei Taharos, Ma’mar Sefunei Temunei Chol, Ma’mar Pesil Techeiles, and other lomdishe works. Reb Yaakov had a phenomenal memory and a very sharp, incisive, and inquisitive mind. But even more so than Reb Gershon Henoch, Reb Yaakov felt especially to his grandfather, Rebbe Yerucham Lainer (d. 1964), who passed away when he was but two years old. He was Reb Yaakov’s inspiration throughout his tragically short life. Indeed, Reb Yaakov published all the writings of his glorious grandfather a few months before his death and considered that work to be his crowning achievement. He studied at Yeshiva Chaim Berlin and then Beth Medrash Govoha in Lakewood. He received unique and excellent semichos from the Chief Rabbi of Yerushalayim, HaGaon Rebbe Yitzchok Kolitz, zt’’l, and HaGaon Rebbe Zalman Nechemia Goldberg, shlita. Died 5 Iyar 5769.

Posted by The Rebbe Reb Mailech at 3:59 PM No comments:

Posted by The Rebbe Reb Mailech at 1:35 AM No comments:

Posted by The Rebbe Reb Mailech at 5:16 PM No comments:

A Reader writes: A terrible thing happened today, the Radziner Rebbe, Rav Yakov Leiner passed away at 46 years old. He was a great historian, yad'an and lamdan. He lived in absolute poverty, with 11 kids. He told me that when he became bar mitzvah his father gave him the Lubavitcher siddur and said "this is our nusach." It was almost in shreds but he davened in it every day. There were over 1000 people there today at the levaya. I can't explain to you my deep pain and tza'ar. I don't know where to put my mind, what an unglick. Every day I stayed after davening at the Radziner shtiebel on 54th street and spoke to him. He knew "everything," and I mean everything. He was a true scholar and yerei shomayim. He was a kanoi for Izhbitza but extremely warm and "liberal" in outlook of life. By "liberal" I mean in ahavas yisroel, he couldn't stand any kano'us against tziyonim or the like. He learned in Lakewood and Rav Yeruchem Olshin gave such a moving hesped! R' Olshin spoke like a true chosid about the dynasty, about Izhbitza, about what RAK held of his Zaide the Radziner Rebbe. I could send you and exclusive recording how a "Litvak" is maspid ah Chasidishe Rebbe.
Listen To Rav Olshin's hesped here.
The Reader Continues:He (RYO) cried like a baby...The groyse niftar spoke to me a few days ago about the chasidic movement and the matzav of it today .. He (RYL) was very partisan for chasidus, then he said to me ....You want to know of a real gadol who is truly so.. its Harav Olshin. After the levaya I repeated to Rav Olshin. His Rebbetzin is Bokshin from Monsey. Reb Aron Schechter's son is also an eydim there.
A 12-Year Old's Hesped
This should not be happening.....HELP!!! Money can now be sent and checks made payable to:
Keren Yesomim Radzin
c/o Dr. Marvin Schick
1529-56th Street
Brooklyn, NY 11219
I understand money can be sent on their behalf via paypal by using the phone number: 718-851-1025. Please. Please don't ignore this plea. Forward this to all your contacts.
Copy and paste this link.
Imagine all 10 yesoimim looking into your eyes.
ולשועת חינונם אל תעלם אזנך
Photos of 12-year old Mordche Yosef writing a hesped surrounded by his father's ksovim.

Posted by The Rebbe Reb Mailech at 3:45 PM No comments:

For those interested, please email me at mimaayanhashiloach@gmail.com. All the seforim from the Izhbitza-Radzin dynasty are available, including the following newly republished, laser printed, one volume seforim: Mei HaShiloach; Bais Yaacov al HaTorah/Sefer Zmanim - Shavuos; Izhbitzer Haggadah/Sefer Zmanim - Pesach; Naos Deshe from Admor Shmuel Dov Asher Leiner of Biskivitz, zt'l, son of Mei HaShiloach, brother of Bais Yaakov; and Tiferes Yerucham from Admor Yerucham Leiner of Radzin, zt'l, the Rebbe, shlita's Zeide and the only one from the Izhbitza-Radzin line to make it out of the fires of Europe, zy"a vky"a!

Make This Page a Favorite!